The phenomenal 80s albums Purple Rain, Parade and Around the World in a Day were recorded by whom?

If your answer is ‘Prince,’ then please head to the back of the class and receive five demerits.

The correct answer is Prince and the Revolution.

Without a doubt Prince, the solo artist, is a musical GENIUS. But together with his band, his genius expands. In 1984, the multi-racial, sexually ambiguous, mysteriously cool group of men and women known as The Revolution represented a musical and social utopia. It’s a powerful thing to see oneself represented on TV and film and whether you were male or female, black or white, straight or gay –  or somewhere in between – you could see a cooler version of yourself reflected in the band’s line-up.

Every time I saw Purple Rain (at least 3 times that summer) , watched one of The Revolution’s videos (dozens of times) or stared at their album’s liner notes (100s of hours) I thought, “this is how the world should be; filled with a diverse group of exquisitely talented musicians – with a penchant for paisley.”

I have and always will be partial to Wendy and Lisa. The fact that these two extraordinary musicians also happened to be impossibly cool, sexy women was enough to captivate me. But once I heard the opening of “Computer Blue” I was obsessed with their narrative and needed the answers to many questions.

What is the exact water temperature Wendy likes? We’re talking bath water, right? And I’m pretty sure I have a general idea of what’s about to ‘begin’ – but I wouldn’t mind details.

As a feminist I can’t applaud the fact that Prince seemed to use the Wendy & Lisa lesbian fantasy solely for male titillation. But the fact that Wendy Melvoin and Lisa Coleman had a committed, years long romantic relationship and an even longer professional partnership (that continues today) makes me think of them as two of the most important LGBT individuals in pop history.

But first and foremost I think of them as musicians. Wendy and Lisa, along with Brown Mark and Doc Fink and Bobby Z and Prince came together to form my favorite band of 1984.

I’ve seen Prince and The Revolution perform twice in concert (two life changing, transcendent experiences!). The last time was in ’85 or ’86 and the show featured the expanded line-up that included Susannah Melvoin, Eric Leeds and Jerome (from The Family) and Sheila E. Towards the end of the show Prince injured himself on stage and exited. The Revolution must have jammed for about 10-15 minutes and they commanded the attention of every person in the audience at Madison Square Garden. I think everyone realized they were witnessing something rare and wonderful. 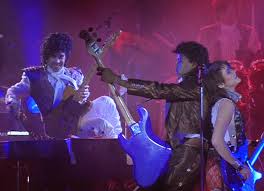 What most of the fans probably didn’t know was the band was going to break up after the tour. A great band doesn’t last forever but I wish we would have been able to get one or two more albums from them. Sign O the Times is a perfect record – but I can’t help wondering what it would have sounded like if Prince had collaborated with Wendy and Lisa and the rest of The Revolution.

But we’re lucky to have 3 albums  – the greatest being Purple Rain. Throughout this month we’re going to celebrate the 30th anniversary of this record (including those amazing B Sides!)

Listening to When Doves Cry for the First Time

5 thoughts on “THE REVOLUTION (AND PRINCE)”