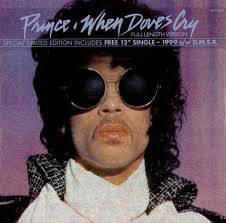 I clearly remember the very first time I heard ‘When Dove Cry.’ It was May 1984 and I was in my bedroom listening to WLIR. The station mainly played New Wave so when I heard the DJ announce he was about to play a new song by Prince I assumed it was another ‘Prince’, possibly some Brit paying an ironic homage to the royal family. But as soon as the song began I stopped caring who was singing. I needed to focus on the music. The following is a completely factual moment by moment account of my first time listening to this song.

0:00 Little do I know my musical world is about to change.

0:00 – :20 Beginning a song with an electric guitar solo? That’s odd. And wait a second, guitar solos belong on rock records – so why am I now hearing a dance beat?  And why has the guitar morphed into something that sounds like an asthmatic robot saying ‘nyah nyah nyah’? This has got to be the strangest opening of any song I’ve ever heard. And . . . I think I love it!

:30 – 1:30  I don’t know what else is about to happen, but right now, in this moment, I think this is the best song I’ve ever heard. Period. Everything I’m hearing is different and amazing. I love the singer’s voice (it sounds both atonal and melodic). The lyrics are surreal and sexy ( ‘Animals strike curious poses’? I’m going to put some energy into figuring out what that means). And that drum beat.  I don’t think I’ve ever really paid attention to the way drums sound until now but there’s something so different and distinctive about the way these drums sound. They crunch and echo. I need to turn this song up!

1:50 Oh wait – why am I not taping this?! (As I head to press the play + record buttons on my boom box – a revelation!) … hold up – I can’t start the recording half way through. That seems wrong. Blasphemous. This song deserved to be recorded from start to finish. I owe that to the song. I owe it to myself!!

2:05 Ok – here comes the chorus again – let me try to figure out what he’s singing about:

How Can U Just Live Me Standing

Alone in a World So Cold

Why Do we Scream at Each Other

Hmmmm –  could this be the same Prince who sings 1999 and Little Red Corvette? Is this song about his family? His girlfriend?

3:00 ( Note – The one memory of this experience that isn’t crystal clear is whether I started dancing. Trust me, there would be many times I would dance along to “When Doves Cry” in my bedroom (many times in ’84 and as recently as two weeks ago) but I can’t recall whether this happened during this first listen. Let’s just say that IF I danced – I would have probably started right about now).

4:15 – I don’t want the song to end. The song doesn’t sound like it wants to end. More guitar solos.  High pitched shrieks. A synthesizer that sounds like an electronic chorus of violins. Now the singer is harmonizing with himself in some high-pitched falsetto. Now he’s just singing “don’t cry’ over and over again and it sounds weird and brilliant.

And finally that synthesizer is back and wraps it all up. The song ended and some other song started and I was floored. Before I knew it was performed by Prince and before I knew it was the single from what would be one of the greatest soundtracks of all time I fell in love with that song.

When Doves Cry went on to win WLIR’s Screamer of the Week competition and I had many opportunities to record it. It remains one of my favorite songs of all time. Over 30 years I’ve listened to this song on cassette, vinyl, CD, and MP3 – and every time it feels like a gift.

Additional Screamer of the Week posts:

The Thompson Twins – You Take Me Up