In high school I had a compulsion to figure out the meaning of the lyrics of all of my favorite pop songs. I would read and re-read liner notes with great reverence (hey – if Pearl S. Buck, Shakespeare, and George Orwell were worthy of that attention – so were Sting, Simon LeBon and Larry Blackmon). The act and ability to decipher the vaguest, most surreal lines was empowering. Wrestle the meaning and make sense of the world.

So much has been written about Michael Stipe’s indecipherable lyrics, but it never mattered to me whether I could understand some (most) of the words he sang. I cared less about the meaning and more about the feeling the words, and the sound of the words, evoked.

That may be the only line I’m completely certain of when I sing along. But I still ‘get’ the song.

But, like so many R.E.M. songs, there’s also hope. That line from the chorus is the first of so many direct, uplifting declarations from the band (You are the everything, Everybody Hurts, No one can see you cry, Every Day is Yours to Win, You’ll be fine).

Who needs a life coach when you’re an R.E.M. fan.

What type of blessed musical alchemy was being conjured in late May of 1984? During the third week of the month I heard Prince’s When Doves Cry for the first time and almost imploded with joy. And then, the very next week, I heard the song that would begin a 30 year relationship with what would become my favorite band of all time. 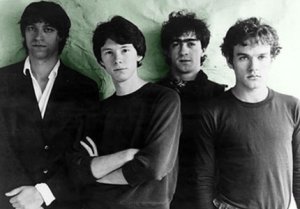 Although R.E.M. released their debut album, Murmur, a year earlier – they were not at all on my radar. I think I had heard of the band and thought their name was clever, I knew they were from the South and I had possibly heard “Radio Free Europe,” but didn’t think much of it (I know – BLASPHEMY! It actually hurt me to write that last sentence. But have no fear – I have since come to my senses). I was happy listening to a steady diet of 30% Rap, 20% R&B, 35% British New Wave, and 15% American pop. I believed R.E.M. was a country band and I didn’t need any country music on my radio or in my cassette player.

I’m pretty sure that was my first thought when I heard the first few bars of “Pretty Persuasion”. The radio station WLIR was holding its weekly Screamer of the Week competition and one of the DJ’s entered “Pretty Persuasion,” from R.E.M.’s just released second album, Reckoning.

First the jangly guitar, followed by a harmonica, and then that twangy, sad vocal harmony.  Yep – this is country music. Country music, but . . . . 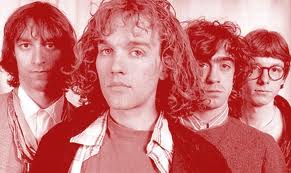 Michael Stipe has recently shared the fact that Pretty Persuasion is about growing up queer. I’d love to be able to re-write history and talk about how I connected to the very subtle gay/queer narrative Stipe was telegraphing. But that wasn’t the case. Stipe wasn’t ready to directly speak or write or sing about being gay and I didn’t feel the particular need to seek out and enjoy gay overtones in my music (Bronski Beat and Frankie Goes to Hollywood would change that in a couple of months).

But I did connect to the song’s evocation of vulnerability. And although I didn’t understand all of the lyrics I knew it felt cathartic and empowering to sing along to lines like  “Goddamn your confusion,” and “It’s all wrong/it’s all wrong!”. Those lyrics seemed perfectly designed for this 16-year-old to sing along to while sitting alone in his bedroom. And the perfection of that song inspired this 16-year-old to put down his reservations about liking country music and pick up his phone to cast his vote for “Pretty Persuasion” to be Screamer of the Week.

When I turned 40 I created a mix of my top 40 songs of all time. The list started changing almost as soon as I burned the CD (life before Spotify) but R.E.M.’s “Pretty Persuasion” has remained a constant. It’s a great song. A perfect song. And it’s a marker. It reminds me of a time when I cautiously (very cautiously) began to open up, receptive to the notion that I could be a slightly different person today, than I had been the day before.

Additional Screamer of the Week posts:

The Thompson Twins – You Take Me Up

Prince and the Revolution – When Doves Cry