In early 1984, even if you loved her first single, “Girls Just Wanna Have Fun” you couldn’t have been blamed for suspecting Cyndi Lauper might be a one hit wonder. But her second single, “Time After Time,” presented the promise of a great pop performer/songwriter with staying power. The song spent two weeks at the top of the pop charts in June 1984, it was nominated for song of the year and is considered to be one of the most beautiful ballads of the eighties.

Joining me to discuss Cyndi Lauper’s “Time After Time” is Nathan James, the author of one of my favorite blogs – The Relative Cartographer. Check out his blog for great short fiction, genealogical investigations, honest observations, wit and warmth.

Sean:  Nathan – thanks so much for joining me to discuss Cyndi Lauper’s Number one hit, “Time After Time.”

Nathan:  Oh, I’m happy to do it. Something about 1984 nostalgia makes me happy.

Sean:  Me too! I’d love to start by asking you about your earliest memories of hearing, “Time After Time.”

Nathan:  My earliest memories of “Time After Time” were hanging out at my neighbor’s house across the street. My parents would never pay for cable. So I had to go over there to watch videos. We’d get together after school and I’d help her with her house chores and then we’d turn on MTV and watch the videos. I remember “Time After Time” was her favorite song because she loved the plaster dog doll Cyndi has in the beginning of the vid!

Sean: I had forgotten about that plaster dog until I recently re-watched the video. I think there were many things about Cyndi Lauper that were attractive to kids and teens. Her image was kind of child-like. So how did you feel about Cyndi and the song?

Nathan:  You know in the video when she takes off her hat at the diner? And she shows off that waffle iron pattern shaved in her scalp?

Nathan:  I’d never seen a girl (or a guy for that matter) with drawings in her hair like that. I completely thought she was a weirdo!

Sean:  You were just like her boyfriend in the video! You judged her and caused her to flee the diner!

Nathan:  C’mon Sean, it was hard not to judge her. Her album is named, “She’s so Unusual” for a reason. And that bright red hair and her fever dream skirts in all those colors and glitter. She was a lot to take in.

Sean:  I mentioned in an earlier post that she seemed to almost be a novelty act – I couldn’t figure out if we were supposed to take her seriously.

Nathan: I don’t think we were supposed to take her seriously for “Girls Just Wanna Have Fun.” I think that’s what makes “Time After Time” so special. I think the powers that be made “Time After Time” her follow-up because it showed her range. She has some SERIOUS range, that Cyndi.

Sean:  And it really is impossible to separate the image from the music.

Nathan:  Yes! But Cyndi’s image always felt genuine to me. I LOVE Madonna. But we all know she would reinvent herself to get attention. Cyndi was real. Case in point: did you catch her on The Today Show last month for the She’s So Unusual 30th anniversary? Two hosts were interviewing her, and she was just a goofball with them. She’s endearing. You can see it in the “Time After Time” video too. You know that was her real mother and boyfriend in the video? Another case in my point that she’s not putting on a character.

Sean:  So what’s your favorite moment of the video (Besides the waffle haircut reveal)? 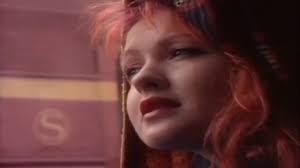 Nathan:  I’d like to say some poignant moment between her and her mother. That image fade in the vid is laughable now, but back then it was decent. But really, my favorite part of the vid is at the end when she’s on the train. The director of the video wanted to put a tear on her face using a dropper. But Cyndi was confident in her ability to cry on the spot. So that tear is hers. And I think it drives the point that “Time After Time” is a relatable song.

Sean:  Is it too late to give her an Emmy?

Nathan:  Hah! Only if the Emmy has a bright emerald wig and about 1,000 necklaces on it.

Sean: So how does the song age for you?

Nathan:  Since it’s about deciding to move on, I think it ages really well. I think most of us have been in points in our lives where we either had to carry on a long distance relationship or break it off and start over again. So any teenager/college student can identify with the words.That’s why the song is still all over the radio and why so many artists have covered it. I have to say I was surprised when P!nk covered it at her concert and the audience was singing the words over her.

Sean:  It’s nice to know Pink and her fans appreciate the classics! I think if you’re a female performer – who feels a bit different  – a bit ‘unusual,’ shall we say – Cyndi is your muse.

Nathan:  Oh, I think some guys have been influenced by her too. Neon Trees? Absolutely.

Sean:  I really need to check those guys out.

Nathan:  Yes, get back in your music time machine every once in a while and check out some current bands, Sean!

Nathan:  Uh. No. Sadly, I am not a fan of the spotlight. But my cats get extravagant stage shows on a weekly basis! I’m a megastar in the shower or in a room by myself.

Sean:  Ok – now we will all have an image of you reenacting the “Time After Time” video with your cats! It’s an image we like!

Nathan:  Haha! Not a bad idea for a new blog feature, Sean!

Sean: Yes! That would be guaranteed to be ‘Freshly Pressed’. Ok – one more question for you. I am such a fan of your fiction, so may I ask you to create a sequel to the video? Tell us what happens to Cyndi Lauper’s character after the train pulls off at the end of the video.

Nathan:  Oh, she travels the country to find more WWF superstars to play her family members in future music videos, of course!

Sean: That’s a beautiful ending. Now I have a single tear rolling down my cheek.

Nathan:  Ooo! I see what you did there! Nice.

Sean: Thank you so much for taking the time to journey back 30 years to revisit “Time After Time” with me.

Nathan: It’s been a pleasure talking Cyndi with you. Especially about this song. It’s a simple song really. And I don’t mean that in a bad way. It’s catchy and dramatic, but tangible. She’s so good at those ballads. And it definitely paved the way for “True Colors” to explode a few years later!

Sean:  Yet another classic from Cyndi. Well thank you – this was fun!

Nathan:  So fun! Invite me back anytime! Maybe I’ll have cat pics next time!

8 thoughts on “Cyndi Lauper’s Time After Time: Number One this Week in 1984”