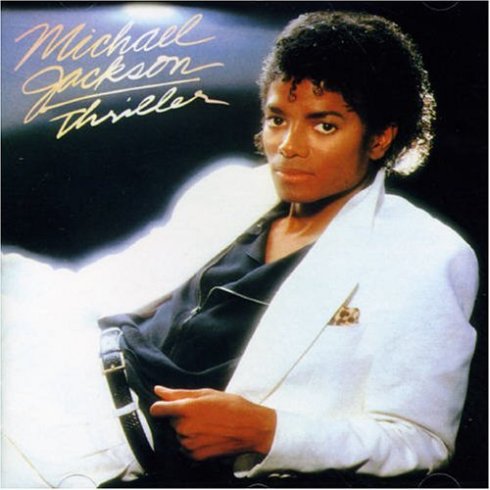 The first single from Michael Jackson’s Thriller was released in October of 1982. So how is it possible to feature that album on this blog, which is dedicated to the music of 1984? It may seem like a Wikipedia mistake, but Thriller’s success was so massive it dominated the charts for almost two years. In 1983 – the album spawned SIX more top 10 singles. In January of 1984 the album’s seventh single, “Thriller,” would reach number one (thanks, in large part, to what many consider the greatest music video ever created). In February 1984 Thriller would win 8 Grammy Awards propelling the album to stay at number one for the first four months of the year! In total – the album was on the charts for 80 consecutive weeks! So what do we talk about when we talk about Thriller? All of the impressive stats are astounding, but the album would not have achieved that level of success if not for the music. And the videos. And that album cover.

And of course we have to talk about the Man who created the album (or shall we give proper credit and refer to the Men – Quincy Jones and Rod Temperton in addition to Michael Jackson?). Thriller ended its reign at the top during the third week of April, 1984, so to mark the occasion I’ve assembled three MJ experts. The sincerity of their love for and breadth of knowledge about the Jacksons is unsurpassed. They also happen to be my good friends so this isn’t the first time we’ve had a couple of drinks and spent hours engaged in Jackson related discussions. The four of us came into our Jackson obsessions at different times (for me it is the memory of watching The Jackson 5 cartoon and the Jackson Variety show and fantasizing about being Randy’s twin brother and experiencing the pure joy of having Randy and Janet as my peers and Michael and Jermaine as older brothers).

Here’s the first part of our Thriller talk.

Sean: I can remember the first time I heard Thriller – I don’t know about you guys – but I can remember being at my uncle’s house, picking up the album cover, staring at the picture and then opening the gatefold – and I remember hearing “Wanna Be Starting Somethin'” and I felt like I had never heard anything like that before.

Sean: Do you think anyone will ever beat Thriller’s records? Will any other album sell as much or be number one for so long?

Norman: No – I think it’s impossible with the modern model of music consumption – it just cant happen. Virtually impossible – it’s like saying can any TV show beat the Roots ratings record.

Sean: So what do you guys think – was Michael chasing that level of commercial success or was he trying to create an artistically great album?

(Note: Off the Wall sold 20 million copies but Michael was still very disappointed. He believed the record should have been much more commercially and critically successful and he became depressed when OTW did not win the Grammy for Record of the Year).

Shana: I have to wonder if Off the Wall had done as well as Michael wanted it to if anything remotely approaching Thriller would have been his follow up because I feel like he kind of did it in attempt to really reach everyone. You can’t say that you don’t like at least one song on Thriller. I don’t know if he would have had that same fire under his butt and had been that pissed off if not for Off the Wall.

Shana: “The Lady in My Life”

Sean: “Wanna Be Startin’ Somethin'” – that’s no surprise to anyone who knows me.

Christine: The song is about La Toya.

Shana: So SHE says

Norman: I heard it was about Liza Minnelli and her time at studio 54.

Shana: La Toya says its about her, but do we believe La Toya?

Christine: He (Michael) has said it’s about her!

Sean: Wait – ‘if you can’t feed the baby/then don’t have the baby’. Who is pregnant?!? I feel like the song is all about unwanted pregnancy and Michael is being a little too judgmental. Was La Toya pregnant?

(Note: We spend the next 5 minutes debating whether the song was written about La Toya Jackson. The discussion veers into the OWN docu-soap Life with Latoya and the revelation that La Toya is a 60 year old virgin. Christine stands firm on her belief the song is about La Toya and some of the Jackson’s sisters-in-law).

Shana: I have this theory, in a weird way Michael pioneered what we now know as ‘House’ without people paying attention to it. Not just like in songs like “Shake Your Body Down to the Ground” and other percussion driven things but on each of his albums.  Whether intentionally or not he created a moment of possession that is really subliminal but it’s always there – as follows: Off the Wall – “Get on the Floor” – he has that breakdown where it’s all just like panting and shit and it’s very nod to the mother land I supposed. Thriller would be Ma Ma Se Ma Ma Sa Ma Ma Coo Sa / Ma Ma Se Ma Ma Sa Ma Ma Coo Sa (from “Wanna Be Startin’ Somethin'”) and it just goes on and on and on in a way that most artists would not let it go on.

Sean: You’re right, it just goes on for minutes – and you want it to go on for even longer.

Shana: And (on Bad) “Smooth Criminal” – that séance moment in the video. Where they all sway and start screaming. I feel like it’s this part of him that no one really talks about.

Sean: You know what I love about that theory – a lot of people criticize Michael for abandoning his black roots . . .

Sean: but musically he didn’t abandon his black roots.

Norman: Not at all

Sean: Do you think Thriller is a perfect album? My answer would be ‘no’ because for me – on a perfect album every single song is amazing and perfect. As great as it is, Thriller doesn’t pass that test. It’s great, but not perfect.

Norman: What song do you skip?

Christine: I skip the track ‘Thriller.’

Norman: First of all Christine don’t ever say that again – “Thriller”, the song, is amazing!

Shana: I’m not having it.

Norman: The breakdown in that song . . .

Shana: At the end?

Norman: It gives me chills and it makes me run faster on the treadmill. You know what song I skip? “The Girl is Mine”.

Shana: I skip that too

Sean: You know that was the first single from the album.

Norman: I did not know that.

Shana: I always forget that song is on the album.

Christine: That song is so good!

Shana: Sean – what’s the one you skip?

Norman: “Baby Be Mine”

Norman: “The Girl is Mine”.

Sean: Oh – so I I’m taking my earlier statement back – it is a perfect album.

Norman: I always skip it. ALWAYS.

Shana: Me too. I never listen to it.

Sean: So you are saying Thriller is not perfect?

Shana: I say it is because every song isolated (except for The Girl is Mine) is perfect alone.  But I feel like you release an album because the songs need to be released together and I think those song don’t need to be together. They could easily be singles that were all just released. I think I’m really just searching to figure out what’s the one thing conceptually that’s driving all those songs… Do you feel like when you listen to Thriller, when you listen to it straight through – what’s the identity of that album – what is it saying about him  what statement is he making with Thriller conceptually.

Norman: For me that album reminds me so much of my older sisters who were teenagers when that was out. It was a time when I really really looked up to them and thought they were the coolest people on the planet. They loved it! So for me when I listen to it I hear 80’s black youth. That’s what the album says to me  – the sounds, the instruments, some of the slang –  it’s all a time capsule of 80’s black youth.

Sean: Maybe the theme of the album is : Michael Jackson – our greatest musical mind and he’s saying, ‘here are all of the genres I love  and I’m going to absorb them and emit them back through my lens.” Maybe that’s the theme – there is so much different music he loved and he was drawn to. But he was going to make every genre his own.

Coming up in Part 2 – after a few more drinks we discuss Thriller’s videos and the unbelievable lengths Jackson’s team had to go to get those videos on MTV. Plus why Thriller was Michael Jackson’s ultimate sacrifice.

Michael Jackson at his best in 1984